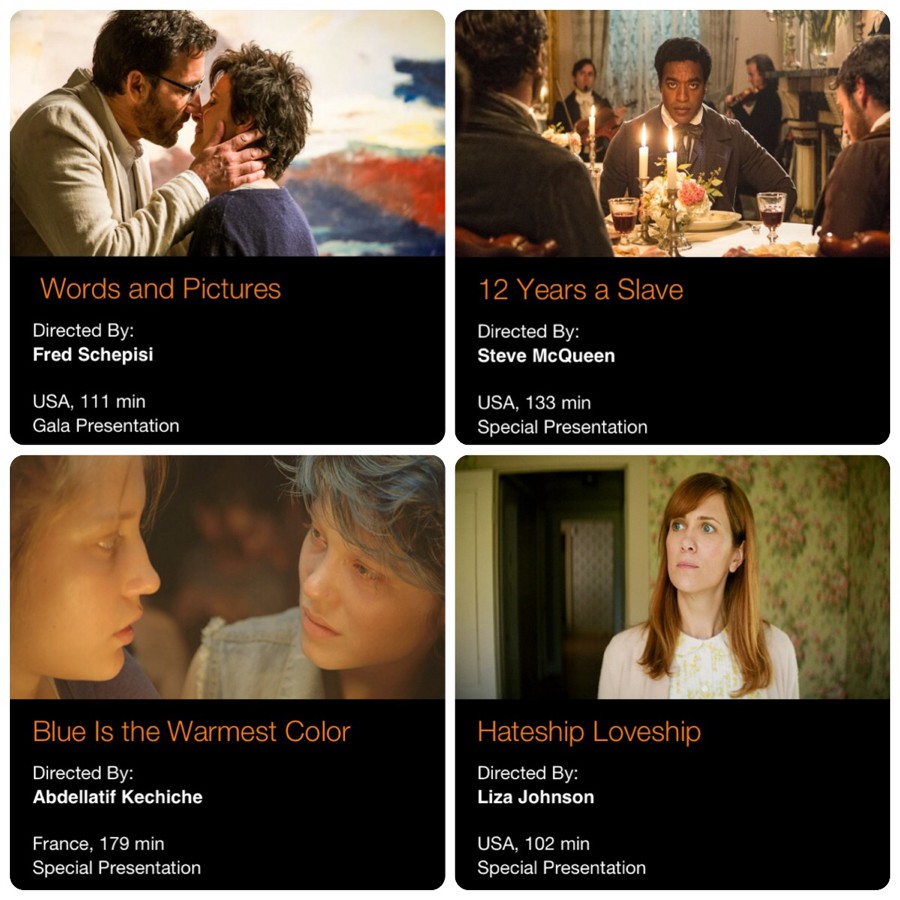 More excellent movies are in this post (see my previous entry), and I highly recommend all of these.

Words and Pictures stars Clive Owen and Juliette Binoche. I've admired Owen's acting chops since I saw him in Closer. When he portrays characters who are emotionally raw he merges into them and touches you. In this movie he plays a divorced English teacher who was once very well respected in the literary community and this brought some caché to his school...but he has been going downhill and has been struggling to hide it and his alcoholism. The new art teacher played by Binoche is an exacting, challenging teacher to her students. She pushes them, she pushes herself, and because of the school's interactive atmosphere she also pushes Owen to challenge himself. Romance blossoms, but this is not about the romance. It's about pushing against how others perceive us and fighting against it, to reveal who we truly are. I love this movie.

12 Years a Slave is a blockbuster of a movie. There is so much which will be written about it that I'll just say that Fassbender was truly excellent in his portrayal of a slave owner who becomes emotionally involved with his blossoming young slave, played by Lupita Nyong'o. She is an actress to watch! In the difficult scenes featuring her, I had to distance myself because I did not want to break down in a theatre of people. Others, however, were sobbing. Kudos to the director Steve McQueen, and cast. Because of all the film's exposure I expect it to win big at the Oscars. I hope Fassbender and Nyong'o win.

I had immediately wanted to see Blue is the Warmest Color because it was a French movie about a lesbian relationship and that instantly gave it buzz. It was the first film I saw at the festival, and I was able to go to a Press and Industry screening of it. I wish I had been more careful in my timing because I had to leave half an hour before it ended (it's 179 minutes long). I also saw it with some of my new-found volunteer friends. We all agreed it was too long, but in a way we appreciated that this gave the director the time to fully flesh out the characters and their relationship. These two (Adèle Exarchopoulos, Léa Seydoux) are beautiful actresses, portraying innocence and curiosity with a light brush, and you should seek them out. You truly understand their characters and what they are going through, or at least I did. I must warn you that the sex scenes between these two showed everything, and at length. Seriously. They were very long sex scenes, so be warned. One of my friends disliked the film because of this, but I thought they were appropriate. (NB: A recent controversy.)

My favourite movie of TIFF was Hateship Loveship. Throughout the week it was this movie that I would find myself remembering: little nuances in the acting, small jokes, the scenes in a motel... It stuck with me. And the script was fantastic. And Kristen Wiig is awesome in her portrayal of a shy, wrong-side-of-the-tracks caregiver. Not to mention the others in the cast! Please go see it. I don't want to write any more about it because I want it to just unfold for you.